Last week I picked up an HTC Merge phone running Android 2.2 from U.S. Cellular which has excellent coverage in the Madison area. My last phone was an LG Rumor 2 which always felt like a high school kids’ phone to me (although lightweight and reliable).

The first thing I noticed was its hefty weight and excellent build quality. It feels like it’s made of optical glass and metal… like an L lens almost. That said, I do prefer a lighter phone. The design of the Merge is very clean, graphite colored, with black rubber accents. The QWERTY keypad is flat and four rows high, but you have to hit the function key in order to type numbers. In the case of the keyboard I think I give the advantage to my old Rumor 2 which has rounded keys as well as stand-alone numerical keys. 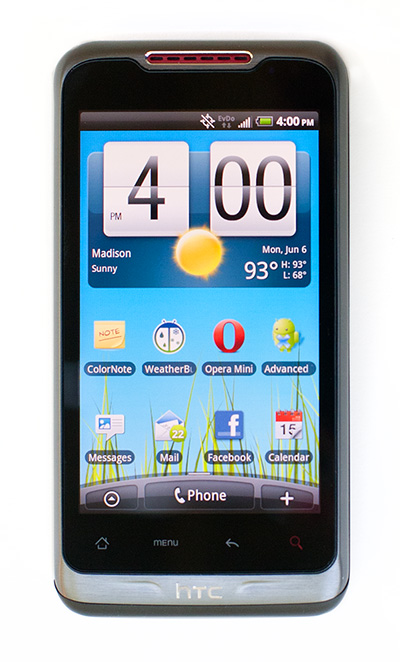 Color accuracy is excellent. The Samsungs I have seen have a noticeable blue color cast which is noticeable right away. The Merge’s screen is very crisp with true colors.

Setting up the phone properly took some effort. Rather than transferring the contacts from my old phone, I opted to sync my Apple Address Book with the HTC People application. My Address Book has much more information such as email and street addresses than my previous phone had in the contacts. Since the Merge is 3G and wifi enabled, I definitely wanted those emails all in one place. The other reason not to use the contacts from an old phone is if you do that and sync with an address book the contact numbers will be duplicated. That should be a priority for Android coders to fix-contact numbers should never be duplicated. Needless to say, I had to update my Apple Address Book before syncing with the phone and that including adding my home area code in front of all the phone numbers so that caller ID would recognize my contacts. In order to get the contacts from my home computer to my phone I needed to set up a gmail account and then sync them with Bluetooth.

Syncing my iCal to the Merge was easier. In the prefs of iCal it allows the setup of a Google Calendar account. This is a very impressive bit of technology sharing since I’m now able to access my home calendar on the road with my phone. It’s also possible to check the calendar while talking on the phone so scheduling appointments is a snap. Calendar entries I make on the phone also sync up with my iCal.

The clerk at U.S. Cellular set up the POP account settings for my Charter email on the mobile email app. Surprisingly, it works like a charm. Much, much easier than logging in via their webmail service like I have to do on my laptop.

I’m a total weather nerd. Since much of my livelihood requires photographing outdoors I need to know what the conditions are now and a few days down the road. The phone supports fantastic weather apps including a heads up display on the home screen. I also use WeatherBug Mobile which is an excellent app that includes Doppler radar.

I’ve found the Android 2.2 interface to be extremely intuitive, reliable (has yet to crash), attractive, and just outright impressive. Mobile apps like Twitter and Facebook fit nicely onscreen and are fun to use on the phone. Facebook has several features disabled on the mobile version but I’m confident that will evolve into a full-featured app.

Almost every aspect of the phone is fully customizable. Each app has preferences as well as the OS itself. You really can tweak everything the way you want it.

The GPS feature used in conjunction with Google Maps is rather inaccurate. It generally puts me 1-5 blocks away from my true location. However, on road trips the Google maps can keep you rollin’ so that you don’t need a road atlas. That is, provided you have internet coverage in the area you’re in. Obviously, some backroads just aren’t going to have a signal.

I considered typing this blog entry on the phone but typing is still much faster and painless on a computer. Whether using the touchscreen on the phone or switching between the keyboard is still kind of a frustrating experience. Keys are small and navigating is sort of tricky. It’s really no better on an iPhone though. It’s just a small platform that you’ll have to compromise with.

The power charger included with the phone is pretty cool. A 5-pin micro USB cord connects between the phone and the small transformer and it doubles as a cable to connect the Merge to your computer. I haven’t tried to use the cable to data connect to my Mac, but it will charge the Merge from my Mac. This can be an advantage to charge your phone from a laptop while at a café or somewhere with limited outlets. Since it’s a standard size (!!) I picked up a spare data/charge USB cord for a dollar to throw in my laptop bag.

Multitasking on the Merge is no problem. Turn on your music mp3s, go check your calendar or websites, play some free games and if you get a call or text, it will come through. Performance is snappy and using the phone is a very fun, media rich experience. I am really impressed with how refined Android is. I kind of figured there would be a lot of things I would not be able to do, but in my experience that is just not the case. It’s not hard to drain the battery inside of one day, but it’s not surprising if you’re on the web with it a lot. Just plan to keep a charger close at hand.

It’s still not as cool as an Apple product. And you can get malware, which is a considerable annoyance.

Thank you for hosting such a creative weblog. Your website happens to be not only

informative but also very inventive too. There are very few people who can think to write

have gone in detail through dozens of websites to find knowledge regarding this.Looking to

many more from your site !!