Once in awhile I need to take a portable music setup to a photoshoot that may not have a sound system on location. My preferred music player is a SanDisk Sansa player with a high-capacity micro SD memory card full of music. They are inexpensive, reliable, very small and lightweight.

I’ve been hesitant to buy a Bluetooth anything because I prefer the 100% reliability of wired connections when it makes sense. Will this be the device to change my mind?

I pretty much narrowed it down to three units because I feel they are about the perfect size for a portable speaker: Anker Soundcore 2, Oonst Angle 3 Ultra, and the XSound Surf that I ended up choosing. Granted, there are some very nice models that are about twice the size of my Surf, but they cost 3-4x more and are larger and heavier than necessary to fill a single studio with sound. My music levels have to be quiet enough so that everyone working on the shoot can communicate without having to raise their voice but loud enough that the shoot has a good, uptempo vibe.

I decided on getting the Surf for several reasons: it supports the latest Bluetooth 5.0 protocol which has shown to be reliable for me so far. It has a rugged build-quality that I like. I obviously don’t plan to drop the speaker but the rubberized frame/metal grille seems  solid enough and the buttons are durable. The three speakers mentioned above all have similar specs: ~12w of power, water resistant, Bluetooth 5.0, tough build-quality, and good customer reviews. However, the battery of the Surf is rated at 2200mAh (10 hr. claimed playtime) which means it only uses a single 18650 rechargeable battery. The other competitors I looked at use a pair of batteries and their higher price reflects that. My solution is just to keep the AC charging cable and/or my portable cell phone charging battery nearby since the speaker works perfectly while it is charging. It’s also nice that the speaker gives verbal alerts when the battery is low so you can keep the party going.

I’ve been testing the Bluetooth signal and it has worked seamlessly with no loss of signal or signal quality whatsoever during my testing with an iPad gen. 7. With a claimed range of up to 100’ I’ve successfully tested the signal goes through all the walls in my home without issue. The SBC codec Bluetooth works really well for me! My thought is that if the engineers at Tribit are competent enough to install Bluetooth 5.0 on the device, that the electronics and UX are probably all well-designed as well and after testing the speaker this week, I feel this is the case. 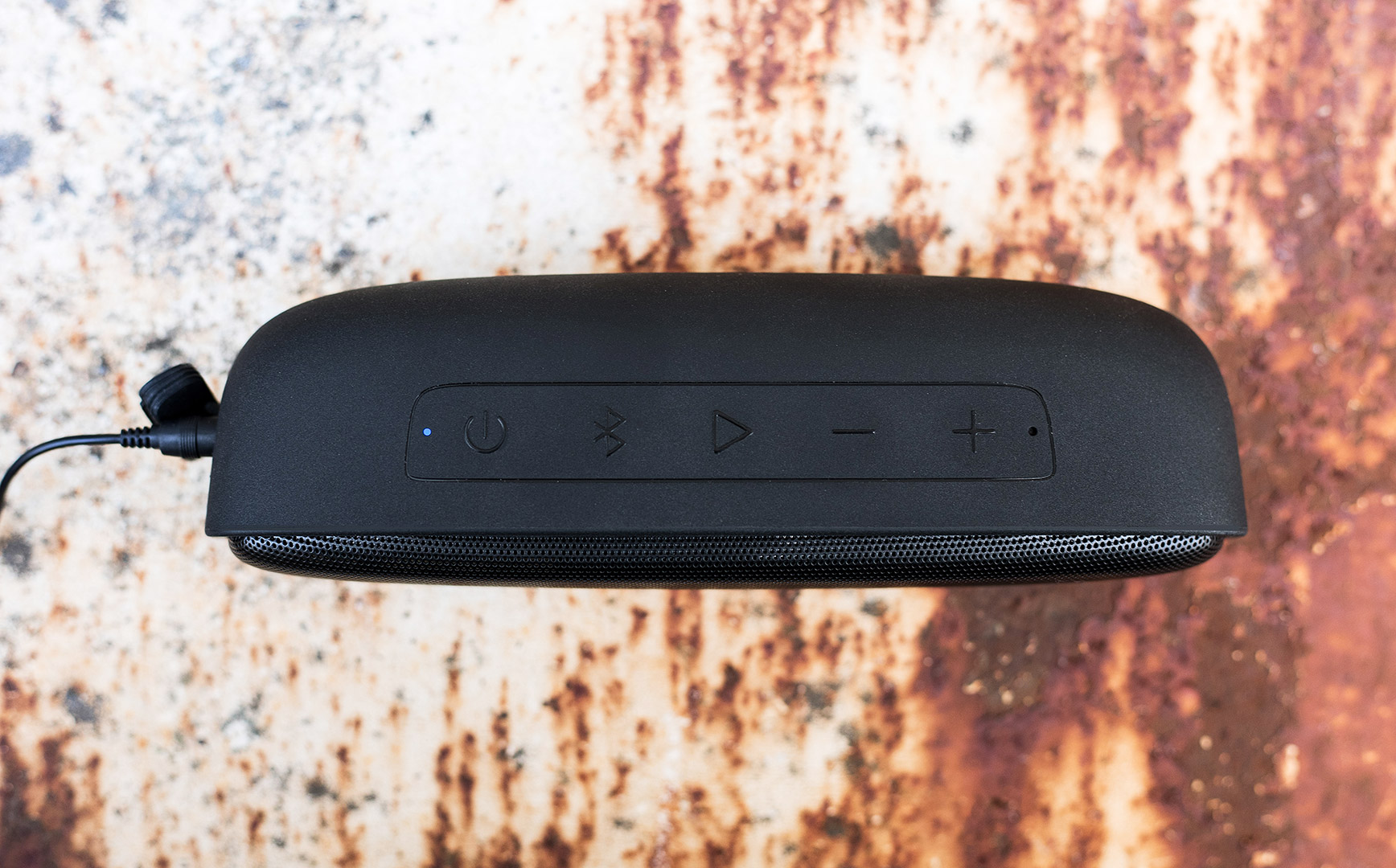 How does the Surf sound? I intend to mainly use the speaker hard-wired to one of my Sansa mp3 players. Bluetooth works perfectly well on the speaker but I prefer not to tie up my iPad or iPhone in order to play my music on a shoot since those are used for other tasks. I feel that for a speaker this size it sounds about as perfect as it possibly could. It gets plenty loud without distorting, but there is a caveat. The small size of the speakers in this very portable unit is the limitation here. The clarity is all fantastic but to my knowledge, no one has built a small speaker that reproduces the bass of a large one. So this speakers in this class are fine to fill a small to medium room with somewhat pleasing sound, but this is no substitute for a real sound system with large drivers. My hunch is this uses the same audio components as the well-regarded XSound Go (which has double the battery performance but only supports Bluetooth 4.2).

The Surf speakers can be wirelessly paired up to playback in stereo if you have two of them. It’s actually a darn good idea to do that if you’re able. A single speaker has no stereo separation-regardless of what marketing departments try to tell us.

The key to getting good sound from a speaker like this is placing it at ear level, aiming it toward your listening area, and simply not running it too loud, as any speakers/amps this small have their limitations-it’s all mid-range and treble.

Just think of listening to music from the built-in speakers of your phone-the volume might be plenty loud but the audio quality is cringeworthy due to the small size of the drivers.

The Surf is the size of a large sunglasses case and weighs about as much as a can of soda and it’s small enough to toss into my messenger bag or camera bag without a second thought. If you use a portable speaker more than I do, you might want to look at some of the larger speakers on the market or better yet, get a set of two Bluetooth speakers that support stereo pairing such as the Surf.

Like it or not, Bluetooth speakers are disposable products so it doesn’t make sense to spend a fortune on them. Eventually the battery will lose it’s capacity, something will break on the speaker, or the Bluetooth standard will be replaced by the next big thing. Many old school boomboxes still work fine after 35+ years of service because they don’t rely on (unreplaceable) batteries or Bluetooth.

I have no complaints about the Surf, but it should be noted the buttons are all stealth black so if you need this in a darkened room the controls can be hard to see. You don’t need to buy a carrying case because it won’t get scratched and won’t scratch anything in your bag or luggage. I’m glad I held out as long as I did before buying one of these because I’m actually impressed with how far this type of technology has advanced and the prices are total affordable.

I purchased this speaker with my own money and have not been compensated in any way for the review.